ADDITION:For those of you who have enjoyed this interview and Brian's outstanding contribution to the art of cinema he has now released his autobiography:
"An amazing insight into the life and career of Brian Muir who famously sculpted the iconic Darth Vader at the young age of 23.
With over 40 years experience working on 60 major films, Brian gives us a window into the mysterious world behind the scenes.
His life's work reveals his unseen talent that is 'In the Shadow of Vader'.

Brian Muir's autobiography is available on Amazon.co.uk or directly fromÂ Brian at vadersculptor@googlemail.com
Visit his website http://www.brianmuirvadersculptor.com to see some of his work spanning 40 years."This is an amazing read covering Brian's long and illustrious career in cinema and some really fascinating pictures of his work.I highly recommend this!
INTERVIEW WITH BRIAN MUIRI am now very pleased to bring this interview with the very talented sculptor Brian Muir to my site.Brian was responsible,during his career in film,for sculpting the iconic armour and helmet for Darth Vader and also the equally iconic armour for the Imperial Stormtroopers.Brian MuirÂ  was born in 1952 in London and his parents moved to a little known village called Borehamwood in Hertfordshire the homeÂ ofÂ ElstreeÂ Studios. At 16 Brian Muir was offered a 4 yearÂ apprenticeship as a sculptor/modeller by his careers officer.Â As well as being assigned practical work for films at the studios Brian also attended Sir John Cass Art College inÂ  Aldgate and then onto Kennington Art College a year later.Â Brian left the studios when he completed his apprenticeship and worked for a company Bradfords for 3 years.Brian worked on many prestigeous commissions including a plaque for the Stock Exchange (unveiled by the Queen).Â Then in 1976 Brian returned to Elstree Studios to work on Star Wars - A New Hope.Â Brian continues to work in the film industry, andÂ  has just finished on the Harry Potter and the HalfÂ Blood Prince currentlyÂ being filmedÂ at LeavesdenÂ Studios. During Brian's distinguished 40 year career he has worked on over 60 films.Â Brian lives in Iver, Bucks with his wife and has 3 grown up children.Brian working on the coat of arms for the Crown Court,1974Bigbaddaddyvader.com:How did you come to be involved in the production of Star Wars?Brian Muir: I was asked by Arthur Healey, the old guy I served my apprenticeship under, if I would like a start on a film called âStar Warsâ and I jumped at the chance.BBDV:What was your original briefing for the work you would carry out?BM:.I was told it was for a Science Fiction film and that I would be sculpting some type of futuristic characters. I was given drawings for each project as required.BBDV:What were your first thoughts when you saw Ralph McQuarrie's concept art?BM: The first Ralph McQuarrie painting I saw was of the Stormtroopers. My thoughts were that they were very detailed and good reference to work from.BBDV:After seeing the concept work did you have any immediate thoughts about how to approach the characters?BM: Having seen the concept work I realized that I would need a full plaster figure to be able to sculpt the armour and head on in clay. I also realized the Stormtrooper armour would have to be sculpted in separate sections for fitting purposes.BBDV:Which piece did you start work on first and did you have a specific reason for this?BM: I started on the Stormtrooper armour initially because the suits were needed in Tunisia for filming by 26th March 76 and they had to be sculpted, moulded,cast in plaster, carved to sharpen lines, remolded and recast in fiberglass to be used as tools in the the vacuum forming process. At least 50 suits were required for the film.BBDV:What Were the challenges you found about realising the concepts?BM:There were no technical challenges as the sculpting side came easily but like anything artistic itâs subjective and with the input of John Barry (designer) and George Lucas changes were made.BBDV:What was your first impression on how to accomplish Darth Vader and how to make the result both practical and effective to the character?BM: I needed a plaster cast of Dave Prowseâs body and head to know that the finished helmet and armour would fit him.From the practical side I knew that to have a minimum thickness of Â¼ inch of clay to ensure there would be a casting thickness in fiberglass from the mould. Darth Vaderâs character and menacing look evolved in the sculpt. 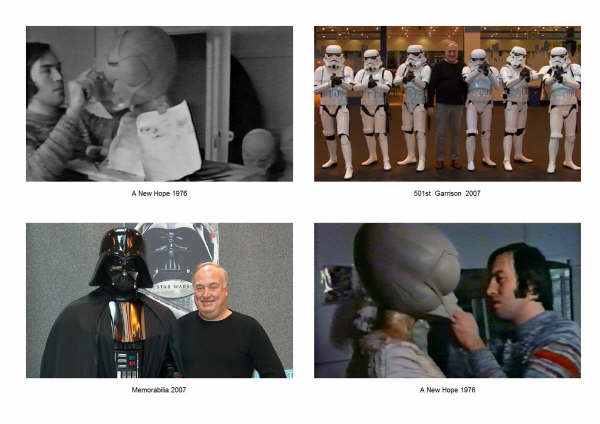 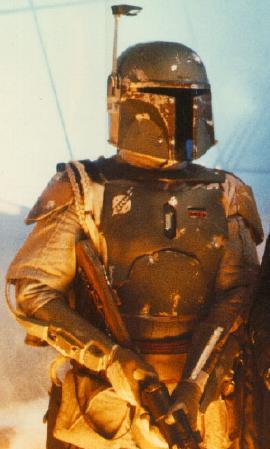 Jeremy Bulloch as Boba Fett in "The Empire Strikes Back",1980BBDV.com:What was your personal experience of working with Irvin Kershner?JB:Great fun and a very good directorBBDV.com:What was your initial impression upon arriving on set?JB:My impression was amazing as I was in the costume with the helmet on.I noticed everyone looking at me.I knew I didn't have much to do in the films but my children would thinkI was cool.BBDV.com:Where there are any specific challenges to working on Star Wars?JB:Just extremely hot all the time.BBDV.com:Was it problematic working in the armour and helmet and were there constrcitions to it's design and construction?JB:It was never easy working in the outfit as it was heavy but I got used to it. I was better off than most of thr actors.BBDV.com:What were your thoughts and reactions upon the release of the Empire Strikes Back and it's striking differences to the original film?JB:I was nervous that the Empire Strikes Back wouldn't be as good as A New Hope but once I saw the finished film I then knew it was as good as the first film.Jeremy Bulloch as Boba Fett in "Return Of The Jedi",1983BBDV.com:How did the experiences vary between working on Empire and Jedi with the different directors and style of action required?JB:There is always a difference with a new director.As I had been in Empire I was told that I should keep the character the same.BBDV.com:What are your fondest memories of your time on the Star Wars trilogy?JB:Just going in to work every day.I had many friends playing parts in the films.We were all like little children dressing up in funny costumes.BBDV.com:Do you have any unpleasant memories of your work on the films?JB:None at allBBDV.com:What would you consider to be the most challenging production you have worked on in your career?JB:A stage play called Dangerous Obsession.There were just 3 actors on stage and I had to break down and plead for my life 8 timesa week for two years.It was exhausting.BBDV.com:What are your personal standouts and what do you feel you have contributed to the business?JB:I am celebrating 50 years as an actor so I think I have contibuted a lot to the business.I always believe you have to have luck in this tricky profession.Courtesy of Ben Broomfield - www.benbroomfield.comOnce again I would like to thank Jeremy for taking the time to speak with me.You can visit Jeremy's site for updates on his appearances and experiences at:http://www.jeremybulloch.com/

Â©2006 Star Wars themes are Â© John Williams and LFL.All pictured props are Â© Niall Balmer and are not to be reproduced.All Star Wars motion picture images are Â© LFL.This is a site purely for fans.